Why Vegetarianism Makes No Sense From A Moral Perspective

This article also appeared as a guest essay at Ecorazzi.


Back in the late 1970s I read Animal Liberation by philosopher Peter Singer and shortly thereafter adopted a vegetarian diet out of concern for animals. The vegetarian diet I ate and which I refer to throughout this brief essay, was what it had come to be generally understood by then—one that excluded flesh but included dairy products, eggs, and honey. So common was this kind of vegetarian diet, that it was rarely necessary to describe it more specifically by using the term “lacto-ovo vegetarian.”

Singer’s book, and others, got me thinking that I should not eat meat because animals used for meat were killed. Obtaining milk or eggs didn’t require first killing the animals, and I assumed that this made some kind of meaningful difference. But obviously I was not thinking clearly. Of course those animals used for their mammary and reproductive secretions are ultimately slaughtered when they no longer produce milk or eggs in quantities deemed economically efficient. It’s morally irrelevant whether slaughter occurs before or after the milk or eggs are obtained, as it is an inevitable part of the overall process, and even hypothetically if the animals weren’t killed, they would still be exploited, still tortured, still brought into the world by us and regarded as resources or commodities for our use.

But Singer, a utilitarian, doesn’t believe in the concept of “rights” when it comes to animals, or humans either for that matter. Nowhere in Animal Liberation is veganism promoted. The focus is clearly on how animals are treated, not on the wrongfulness of their use as a fundamental violation of individuals’ rights. Reading that book changed how I looked at things, but only many years later would I realize how little.

For the next 25 years I was a vegetarian. All that meant was that I ate a vegetarian diet. Vegetarianism is a diet, while veganism is the process of living in accordance with a simple, fundamental moral principle—that we should not cause unnecessary harm to animals. There is one context I can think of in which vegetarianism makes sense, and that’s for people who don't eat meat simply because they don’t like the way it tastes. But anyone who is a vegetarian for the benefit of animals is delusional or in denial, just like I was.

It didn’t help that the big animal advocacy organizations did not at the time take a strong and unwavering stand in favor of veganism. They still don’t. No doubt this is out of concern for alienating a significant portion of their donor base. I had friends who very much considered themselves animal rights activists, who were eating dairy. Like me, they had read Animal Liberation and followed many of the donation-driven animal welfare organizations like PETA.

I don’t consider my years as a vegetarian as a stepping-stone or prerequisite to veganism. Instead, I was stuck in a morally confused state as I arbitrarily avoided eating flesh while continuing to consume dairy and eggs, wear leather shoes and belts, and falsely think I was doing a good thing and setting a rational and consistent example for others. Had I been exposed earlier to clear arguments for veganism, I’m sure I would have gone vegan sooner than I did.

I eventually acted on the inconsistencies I increasingly saw with vegetarianism, and became a vegan. A few years later I discovered Professor Gary Francione’s animal rights theory, known as the Abolitionist Approach, and it quickly became apparent to me how the confused messaging from the big animal groups that embraced Singer’s work and focused on treatment rather than use, was counterproductive. I regret that my years as a vegetarian were not additional years as a vegan. However, looking forward, I hope through clearly presented vegan education to keep others who care about animals and justice from going down that same morally muddled path.

The six principles of the Abolitionist Approach to animal rights may be read here.

Learn how to be vegan here and here.
Posted by Ken Hopes at Monday, January 09, 2017

Number of animals killed in the world by the meat, dairy and egg industries, since you opened this webpage. This does not include the billions of fish and other aquatic animals killed annually.

Based on 2007 statistics from the Food and Agriculture Organization of the United Nations' Global Livestock Production and Health Atlas. 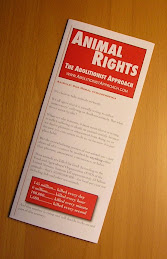 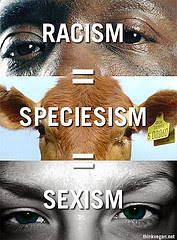